Consegna gratuita in Italia per ordini superiori a 45€ 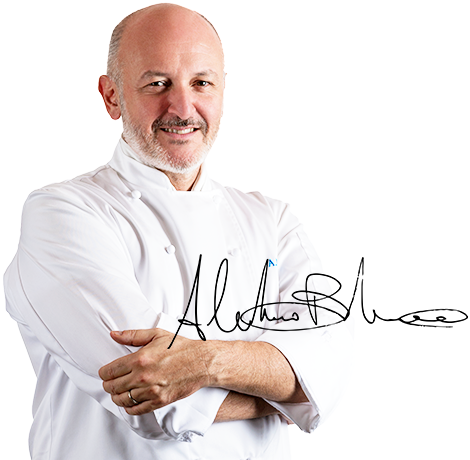 “ Even as a child I had two great passions, cooking and flying.
I don’t fly, except with my head!
Perhaps the grandmother and also the mother have given me the feeling of cooking
and what I still have are memories of taste and perfume that are indelible to me. “

The life of Alessandro Breda , starred Chef born in Conegliano Veneto in the province of Treviso in 1968, told through his own words:

“ Being curious, tenacious and determined by nature, after having attended the hotel school in Falcade (BL) with related internships, I was not completely satisfied.

Information in the 80s was not like it is now, if you wanted news you had to really struggle, the web was far away.

The great restaurants in Italy were not as many as now, the most coveted were the San Domenico in Imola, Paracucchi and Gualtiero Marchesi in Milan .
It was the latter that attracted me so much that I sought news from him everywhere.

After two valid experiences in two starred restaurants , one in the province of Mantua and one in Paris, I was able to do my first interview with the chef of Marchesi, from which another 3 or 4 followed and I think they said yes out of exhaustion. .

At 19 I was part of the Via Bonvesin brigade, I was in the forge of ideas of what avant-garde cuisine would be.

The beauty of being there was not a matter of curriculum, it was a kind of school of thought, a continuous evolution of ideas, and all the guys who were there were not by chance.
They were all boys with a great hunger for knowledge.

After two and a half years I had Mr. Marchesi send me to the Tantris Restaurant in Munich with the chef Heinz Winkler , the progenitor of what was then the new German cuisine.
Here there was no room for ideas or anything else, here it was about precision and rigor. I stayed there for about 3 years.

A year follows at the Pinchiorri wine shop , a year at the Four Seasons in London, then I decided to open a small restaurant with about 30 seats, Il Capitello in Corbanese di Tarzo .

For about 6 years I managed it making my bones as a restaurateur, so as to be ready in 2000 to take the Gellius restaurant, a very particular place (Restaurant, Bistrot and Bar) having inside the unique Roman finds.

In 2004 we received the first Michelin star , we have always obtained good scores in the other main guides and we are still part of the Jeune Restaurateurs d’Europe association. “

HIGH AND SOFT FOCACCIA WITH POTATOES AND CHEESE